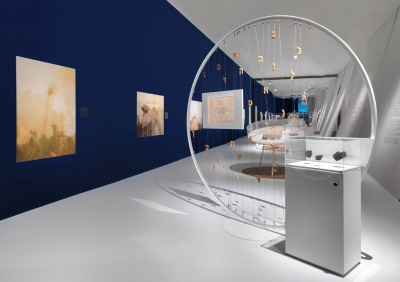 A Time for Everything
Rituals against Forgetting

The exhibition focuses on strategies against forgetting from a Jewish perspective, on Jewish rituals of transition and remembrance. It shows the origin of these rituals, how they are practiced, and what they mean. In addition to the cyclical religious rituals of remembrance, strategies against historical forgetting are shown.
Birth, childhood, school, maturity, independence, marriage, old age, and death mark painful or joyful phases in each of our lives. Like other cultures, Judaism has also developed strategies of helping us through these transitions. In the exhibition, some sixty objects from public and private collections stand for the universal nature of these rites of passage that at the same time are of unique importance to each individual.

The community also conducts rituals recalling events that shaped history. These include annual holidays and several-day festivals such as Pesah that commemorates the exodus of the Israelites from Egypt, Hanukkah, the Festival of Lights (remembering the victory), and Sukkot, the Feast of Booths (commemorating the pilgrimage). All three last several days and remember important passages in Jewish history or the year cycle.

Collective secular rituals include those that strengthen national identity and the loyal bond to the "fatherland." Contemporary remembrance rituals also reflect the Nazi era and the Shoah. The American artist Quintan Ana Wikswo based an artistic project on the remains of the so-called "Sonderbau" (special block) in Dachau – the concentration camp brothel – and created literary and photographic commemorative works of art. Even today, this group of victims – sexually exploited women in concentration camps – is still omitted from public commemorative rituals.

Wikswo"s pictures focus on those Jewish stories of suffering that have been neither told nor documented. A selection of these haunting, large-format photographs presents a challenging contrast to the "innocent" objects and rituals against forgetting.